Dear community, as we launch Phenotype Phebruary, maybe this is a good moment to ask, do we know specific limitations of Atlas’ Cohort Definitions from a conceptual/medical standpoint?

For example, it seems to me it is not possible to express “increase in measurement value.” For example:

A similar limitation would be phenotypes that require a computed value, e.g.:

It can be hard to try to claim something is not possible, specially when you don’t regard yourself as an expert. But perhaps we could allow the benefit of the doubt here, and share barriers you seem to have encountered along the way.

Kind regards to everyone.

Thanks @fabkury , this is a great thread to initiate as part of PhenotypePhebruary:).

I’m hoping that, as we are building phenotypes and consider using ATLAS, we can expose ‘limitations’ based on real need (rather than just unavailable features that aren’t actually required to complete an applied task).

That said, some of the limitations are listed in issue tracker on github for CIRCE (the cohort component underneath ATLAS) that @Chris_Knoll maintains: https://github.com/OHDSI/Circe/issues. And if anyone encounters other limitations, this would be a good place to capture them.

As it relates to phenotypes that I personally have had to build for which I KNOW that ATLAS can’t (yet) handle:

Other ‘limitations’ that I am aware of but have never personally impacted any of my phenotype development work: ATLAS doesn’t cover all CDM tables: for example, the new EPISODE tables added in v5.4 are not used. It also doesn’t support the COST, NOTE, NOTE_NLP, FACT_RELATIONSHIP. And as @fabkury points out, ATLAS doesn’t do generic computation of composite scores or derived values across sets of measurement values.

All that said, I have to say that I’m always extremely impressed with what @Chris_Knoll has built, because I’ve now made hundreds, maybe thousands, of cohorts using ATLAS and it is quite rare (<1%) that I reach the conclusion of ‘can’t be done’, sometimes it takes a little creativity to model but often I find a solution for the data that I’m working with. So, on expectation, ATLAS is a great place to start if you are starting your journey to build a rule-based phenotype algorithm.

Dear @Patrick_Ryan, thank you for the amazing, rich response.

It seems to me that a lot comes down to the inability to express correlations between CDM rows other than by date values. Please correct me if I’m wrong. Atlas will let you identify one record (one row) in a CDM table by:

So you can’t express relationships between values from two rows, such as “increase in intraocular pressure between visits.”

About scores, such as “disseminated intravascular coagulation score >= 4,” if the clinical computation is simple enough it may be theoretically (but probably not practically) possible to “unwrap” the phenotype into a test for the occurrence of any of the possible ways a group of records can add up to >= 4. I suspect this kind of “unwrapping” may ring a bell in some people’s memories, in the context of calculating scores or in other contexts within phenotyping. The point is this: it’s not always easy to claim something is not possible to express.*

*At conceptual level, I suppose one can argue that only a Turing-complete programming language can promise you it will be able to express any (computable) logic you want whatsoever, and that any GUI tool is usually much below that level of expressive power. So if we cover the vast majority of desired phenotypes, our “phenotyping model” has been a success.

I see Patrick’s point that true barriers (“impossible” phenotypes) are rare, which is true, but here’s my point. Even when you do find a “clever way to do it,” this is also interesting to talk about. Are you sure the workaround is guaranteed to give the same result as originally intended? Or is it an educated approximation? What functionality exactly are you missing, that would allow you to define the cohort without workarounds?

A similar kind of barrier is when you’re developing a phenotype, and the query seems to never finish, and you decide to use an educated approximation – a workaround. Such situations may also give insight into the edges of our models for electronic phenotyping, although query run time (or time complexity) is a much more complex topic. It would be great if we could build a shared understanding of what are the edges of our models, from our real-world experience. I know of at least one phenotyping tool (https://academic.oup.com/jamia/article/28/7/1468/6169466, not FOSS however) that is importantly different when it comes to query complexity, virtually dispensing the need for workarounds regarding query run time. I do not mean to advertise ACE here (much less denigrate Atlas), I am just pointing that our paradigms can sometimes insidiously impart noise onto our results, so let’s talk about them.

In my PhD work, I considered query be consisting of query elements. I defined a problem of inter-element parameter passing. 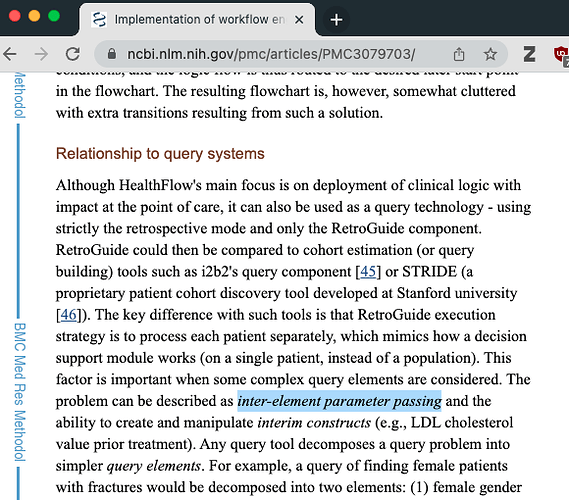 Thank you for this comprehensive list to highlight some areas where Atlas might be of limiting nature. I have a few questions to follow-up on this:

With regards to exit strategy, is there a way to censor based on age criteria? I do not think this is available in the interface, but it would also be helpful to see how to implement that on SQL.

Censoring Events will trigger a person to exit the cohort at the specified time. The limitation is that you need to find an event in the data to trigger the exit. You could specify a censor event using a Visit with age criteria specified for that, but the problem there is that if the person didn’t have a visit, then the person will persist in the cohort longer than you intend. What we would need to implement is a sort of ‘demographic era’ where you can specify an age range and the query will yield the set of people in the database (based on observation period) that are in the data for the period of time that corresponds to the specified age range.

You can so this in Atlas using Observation Period as entry events. You use the ‘user defined dates’ option to specify the event start and end date, where the person must be in the database that completely covers the user specified start/end. In this way, you could define a cohort entry event of soemthing like 2019-01-01, and everyone who is ‘active’ in the data on Jan 1 2019 will be in the cohort with a cohort entry event starting on 2019-01-01 and ending on 2019-01-01 (or a later date if you want to enforce that they are in the data for a specific date range). Then, you can specify a ‘fixed date offset’ exit strategy to keep people in the cohort for a fixed number of days (ex: 365 days). With a 365d cohort persistence, people who are in the data past 2020-01-01 will be censored at 12/31/2019, and people who exit the database before (ie: their obervation_period_end_date is earlier than 2020-01-01) would be censored at their observation_period-end_date (cohorts will always censor at observation_period_end_date)

Thanks a lot for your quick response, very helpful! I just want to make sure that I got it right.

What we would need to implement is a sort of ‘demographic era’ where you can specify an age range and the query will yield the set of people in the database (based on observation period) that are in the data for the period of time that corresponds to the specified age range.

Does it mean that this is not yet a function on Atlas? Is there a way to alter that in the SQL code or are there any examples of it from previous work on Atlas?

This does make a lot of sense. I would essentially want to cover a period longer than a year but individuals do not need to be enrolled at that exact age when their observation period start - I just want to see the count of those who were active at some point within that time frame being aged within the predefined age interval. Based on what you suggested, I tried to somehow apply it on the Atlas UI with an example of capturing those with an observation period in the database being 18-65 between 2009-2013. I would really appreciate if you think this seems correct: https://atlas-demo.ohdsi.org/#/cohortdefinition/1779854/definition

Thanks a lot again!

Does it mean that this is not yet a function on Atlas? Is there a way to alter that in the SQL code or are there any examples of it from previous work on Atlas?

It’s not a function in atlas, but we’ve written custom sql to generate person-level episodes based on age criteria:
\

This is in OHDSI-Sql syntax, so you’d have to render and translate this sql using SqlRender.

You can run this query on your own CDM, and you’ll get a set of cohort records (if you just run the SELECT at the end) that gives you each person’s membership in each age/gender category that’s defined in the temp table #subgroups. I would use a similar query as this to define a ‘demograpic era’ criteria for building entry events based on age and gender for a period of time.

Based on what you suggested, I tried to somehow apply it on the Atlas UI with an example of capturing those with an observation period in the database being 18-65 between 2009-2013. I would really appreciate if you think this seems correct: ATLAS

That is correct except there’s a ‘bug/feature’ in circe that may catch you unaware: when using ‘age’ criteria, it checks the age based on the record’s start date (ie: the observation_period_start_date) and not the user-defined start date.

The fix is easy, tho: move that logic to an inclusion rule like this:

What this does is it takes each entry event (which you made as Jan 1 of each year) and a person will only be included in he cohort at that date if they are in the right age. The reason why it works is that the inclusion rule will work off the dates yielded by the entry events (which you defined the start and end dates) vs. if you use the criteria directly on the observation period criteria, age criteria is based off the start_date of the record.