We’d like to submit a phenotype to the OHDSI phenotype library - I’m following the text description from the README of what to do, and citing text directly from Mollie McKillop’s PhD dissertation for most of the clinical description/literature review/validation studies.

Endometriosis is a complex, enigmatic, chronic disease in which endometrial-like cells grow outside the uterus [Vercellini et al., 2014]. These cells are usually found in the pelvic region, but can become established in more distant tissue like the lungs, diaphragm, and intestines. During the menstrual cycle, the ectopic endometrial-like tissue bleeds into places from which the menstrual fluid cannot escape, causing the formation of adhesions and cysts [Hao et al., 2009]. The disease is estimated to impact approximately 10% of women in reproductive age, with estimates between 5% and 15% [Wheeler 1989, Cramer and Missmer 2002, Damewood et al., 1997]. The prevalence of endometriosis is hard to estimate given a lack of biomarkers for the disease and the need for laparoscopic surgery for diagnosis [Ahn et al., 2017]. Diagnostic guidelines describe symptoms of endometriosis as pelvic pain and infertility [Armstrong 2011, Riazi et al., 2015]. However the literature documents other prevalent symptoms which include but are not limited to severe menstrual pain, pain with sexual intercourse, chronic pain, constipation, and bloating [Khazali 2016]. Because of the symptomatic variation and non-specific symptoms, diagnosing endometriosis is challenging and often incidental [Dunselman et al., 2014].

Endometriosis is an enigmatic disease; despite its presence in patients being documented for centuries, the etiology and pathogenesis remain unknown. Individuals with the condition present with a wide range of symptoms beyond painful periods and infertility, but these symptoms are often not widely recognized, nor is there consensus as to what symptoms relate to the disease. These symptoms also greatly differ from one patient to another for unknown reasons. The relationship between symptoms, surgical and pathological stages is not clear [Bernuit et al, 2011, Vercellini et al, 2006]. Due to the large set of symptoms, their heterogeneity across individuals, and their non-specificity, there is a gap between what is known about the disease and how it is experienced by patients. There has been improvement in the recent years; for instance, McKillop et al., 2020 have published research highlighting the promise of using unsupervised learning of endometriosis subtypes from self-tracked data. This submission [and Mollie’s dissertation] also contains one of the first clinically-validated and rigorously tested definitions for endometriosis.

A copy of the phenotype is currently publicly available here, with the logic already implemented in ATLAS.

The definition is based on a series of endo-related laparoscopic procedures and prevalent conditions, as well as a concept set defined for endometriosis. The inclusion criteria include requiring patients to have at least two diagnoses of endometriosis, as well as age constraints.

For clinical validation and review, in total, 1,406 patient records from Columbia University’s EHR were reviewed by two clinical experts. Setting expected confidence limits between 0.6 and 1, a subset of 38 records were used for calculating Cohen’s Kappa. Agreement between the two annotators was very good, and a kappa score of 0.89 (p-value <0.05) was achieved. Across all phenotype definitions, cohort B [the linked phenotype] had the highest overall performance with a precision of 85%, recall of 70%, and a negative predictive value of 84%

Hi @tonysun Thank you so much for beginning this submission.

Please understand, you are one of the initial submitters, and we are still piloting the peer review process. The reference guidance are in DRAFT and not final (i.e. may change as we learn and feedback is welcomed)

Regarding Logic Description: Please see guidance here Guidelines on writing Cohort Definition Logic Description • PhenotypeLibrary
Looking at the cohort definition in atlas.ohdsi.org (screen shot) - one way you could write this is (example for your cosnideration) 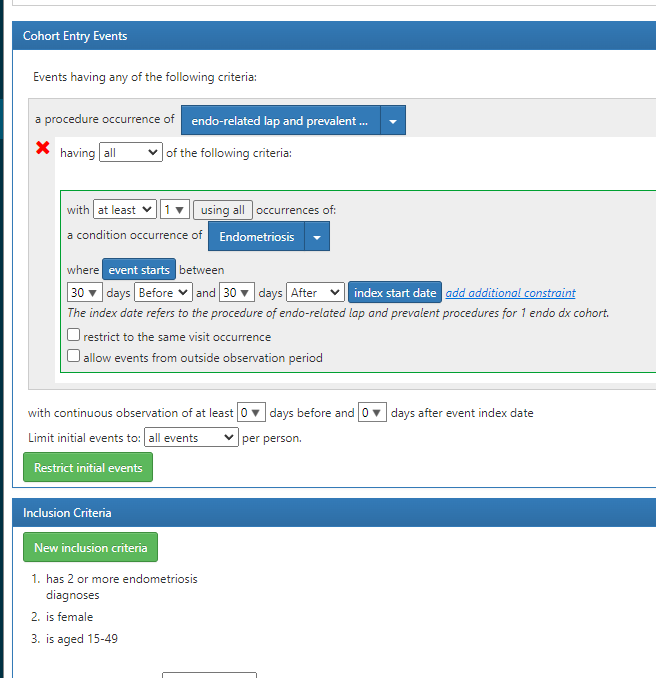 There are few additional things

Once we get this - then we will do the following