In this post, we will focus on drug-induced liver injury (DILI) and adjudicating potential cases.

If that sounds interesting, read on.

DILI is a good example of a condition that perfectly fits observational research. Since it’s so rare, it is rarely captured in small size clinical trials, which points out the need for post-marketing research.

It used to be the most frequently cited reason for drug withdrawal (up to 32% of drug withdrawals, recently decreased following FDA statements). We know about an increased risk of DILI for some of the drugs (e.g., acetaminophen,amoxicillin-clavulanate, antiepileptics). There are many outdated stats regarding DILI prevalence and proportion in liver disorders, but what we know for sure is that it varies geographically and is more common in adults.

Presentation: can mimic both acute and chronic liver diseases, both hepatocellular and cholestatic. Can be symptomatic or only include asymptomatic liver test abnormalities. If symptoms are present, they include malaise, low-grade fever, anorexia, nausea, vomiting, right upper quadrant pain, jaundice, acholic stools, or dark urine.

Suspect when a patient has underlying liver conditions or has taken drugs that metabolize in liver.

Treatment: mainly drug discontinuation, sometimes glucocorticoids; for some of the drugs – antidotes (like N-acetylcysteine for acetaminophen and L-carnitine for valproic acid toxicity).

Prognosis depends on the severity and form of injury. In severe cases can progress to hepatic decompensation, encephalopathy etc.

Therefore, we need to create a phenotype, which will have three elements:

We decided not to reinvent the wheel and take the existing phenotype that eMERGE has previously developed (led by @hripcsa and @chunhua). Others exist, but that one has the most discussion about phenotype development, details on implementation and the same data source at our disposal. They’ve done huge work on developing and implementing the phenotype, which as you can imagine took some time (@hripcsa said ~ 6 months – I’m really surprised it took ONLY 6 months).

I’ll post a figure on phenotype development in eMERGE here as I find it quite interesting: 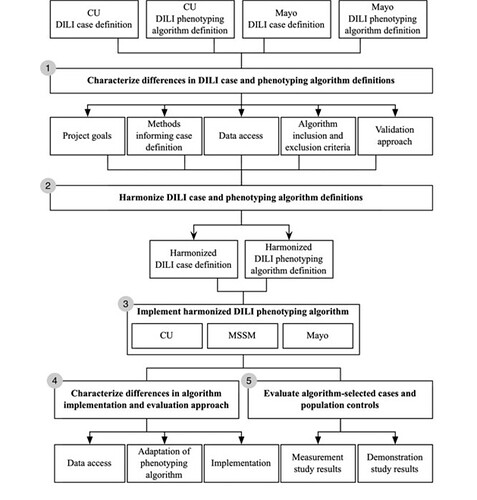 Basically, two institutions developed their algorithms which were then fused. Also, interesting how the gold standard was created there (intersection of the patients identified by the NLP algorithm and by the acute liver injury ICD-9 algorithm).

We borrowed a lot from their phenotypes (ATLAS):

We iterated over the cohort to remove other obvious reasons for liver injury and finally got 5,259 patients.

At this point, we wanted to look at individual records, but it is impossible to review them all. Given the low prevalence, reviewing the records at random will likely miss the cases.

As you can imagine, patients have various age, co-morbidities and prior observation, have various time between liver injury and drug exposure.

A couple of examples:

Patient M, 59yo, chemotherapy, multiple myeloma, non-infectious diarrhea and transaminitis, a dozen of drugs that can cause DILI, resolved. In chart: DILI on melphalan

Based on the examples, I would say that it’s really hard to establish DILI both in structured and unstructured data, especially for new drugs. It looks like we need better approaches for a) finding those potential associations and b) establishing a causal relationship between a drug and any rare adverse event.

I heard that some hospitals have procedures for reviewing and selecting charts with potential adverse events (done by humans), so that the final adjudication is done on a small sample. I wonder if and how we can scale and automate the process, so I would love to hear your thoughts (and read related papers).

Thank you @aostropolets , this is terrific. And great to showcase the work from our friends in eMERGE that’s available in PheKB. I know @judy Racoosin was very keen to see community activity around drug-induced liver injury, so I’m glad that you have started this discussion. And indeed, there’s lots to dig into here.

First, I have to comment that I find ‘drug-induced liver injury (DILI)’ an interesting case for phenotyping, in that it combines together the condition (liver injury) with its attribution (drug), much in the same way that we see some folks looking for diabetes-induced complications, virus-induced outcomes, etc. In these cases, it seems the task for the phenotyper is to identify cases of the condition and potentially impose inclusion criteria that exclude cases that can’t have the appropriate attribution (in this case, liver injury in the absence of any drugs can’t be drug-induced). But then, for DILI, once ‘liver injury without other attribution’ cases are identified by the phenotyper, it seems the responsibility of the pharmacovigilante to perform the necessary characterization and estimation studies to determine if a drug exposure could have a causal effect. That is to say, I’m not sure DILI is only a phenotype problem, but clearly DILI can’t be analyzes in a drug safety context without strong phenotyping in place.

So, this reminds me of @agolozar 's discussion a day ago on phenotyping non-small cell lung cancer (NSCLC) and taking an approach of exclusion: NSCLC = lung cancer (LC) - small cell lung cancer (SCLC), then the problem can be decomposed into: 1) how to make a good phenotype for LC (and estimate its measurement error), and 2) how to make a good phenotype for SCLC (and estimate its measurement error), and 3) combine together these two cohorts by using LC as entry event and SCLC as inclusion criteria, to result in NSCLC and ‘infer’ its measurement error based on the errors from LC and SCLC. Here, we could start by phenotyping liver injury (LI) and then phenotype ‘non-drug-induced liver injury’ (NDILI), with the idea that DILI = LI - NDILI. Here, it seems the critical task is to define the clinical description of ‘liver injury’ (others would to weigh in terms, but I’m suspecting that clinically this isn’t just all forms of hepatic impairment), and then define the specific clinical entities that would definitely fall within NDILI (@aostropolets provides examples here: autoimmune hepatitis, Wilson disease, viral hepatitis, ischemic liver injury, Budd-Chiari…I suspect there are more), As nicely pointed out here, then we have to recognize that excluding persons with NDILI means that any ‘drug-induced’ events that occur within patients with NDILI will not be captured, so that means there will be some sensitivity error in our approach.

I’m keen on other people’s thoughts on @aostropolets 's assertion that:

Given that we want to use the phenotype in safety surveillance, we are interested in a rather specific phenotype. NPV should be prioritized over PPV.

If our use case goal were to estimate potential public health impact by characterizing the incidence, then I could imagine one desiring a more sensitive definition. While if one was interested in population-level effect estimation to produce a relative risk for causal inference, then one may more concerned with specificity and striving to minimize differential error between exposed and unexposed cases. In both cases, having proper methods to calibrate characterization and estimation results for the measurement error would be preferred to just settling on a definition and assuming no error as we customarily do (looking at you @jweave17 and @chenyong1203 ).

Re: lab values, I know Hy’s Law is commonly used a rule to follow for identifying candidate cases in clinical trials (ALT or AST > 3x upper limit of normal AND bilirubin > 2x upper limit of normal), and indeed such a rule can be implemented in ATLAS to identify cases in datasets that contain these laboratory measures. I suspect others in the community are much more knowledgeable about how else lab values can be applied in objective criteria: for example, it seems there can be other reasons why aminotransferase would be high that makes the labs not necessarily specific (even if data were available). Is it possible to have DILI cases in absence of the ALT/AST/bilirubin elevations, or would observing liver labs in normal range be a suitable exclusion criteria to consider when phenotyping?

Right, I think we (as a research community) are mostly interested in newly marketed drugs and whether those cause DILI. Already known drug toxicity is rather a tool to estimate the performance of a method

I’m very much interested in calibration work by James and Yong, so would love to hear more! Just as you said - we acknowledge that there is a measurement error but do not really adjust our patient characterization for it. One can argue that if such methods exist there would be no bad phenotypes - only those whose measurement error we don’t know.
I would think that normal liver tests would at the very minimum indicate the the observed toxicity is not severe enough for us to care about.