This is a complex clinical idea - and i have found conflicting ways in authoritative sources have defined it. This makes it difficult to phenotype. Can we phenotype Cardiomyopathy? A general principle that we follow - If we cannot come to shared understanding of what the phenotype is - by authoring a clear clinical description - then we probably cannot phenotype it?

I started by reviewing authoritative sources (Harrison’s text book, Uptodate) and put my notes here. Because of the wide variation, i struggled because the sub-types were truly different clinical ideas and considering them as one broad “cardiomyopathy” seemed not appropriate.

Because i felt like i was stuck - i went to Atlas and did a lexical search and found that there were many concept id’s for the idea of cardiomyopathy with two of them accounting for almost all of the concept id. These two were also non specific - and different from the contemporary classification of dilated cardiomyopathy, restrictive cardiomyopathy and hypertrophic cardiomyopathy.

I then investigated the trends in use of such codes in various data sources. see ARES reports for concept id and found that their utilization changed (increased dramatically) after 2016 (in US datasets) when the switch happened from ICD9-CM to ICD10-CM.

Some excerpts from my readings

contemporary definition for cardiomyopathy is a myocardial disorder in which the heart muscle is structurally and functionally abnormal in the absence of coronary artery disease, hypertension, valvular disease, and congenital heart disease sufficient to explain the observed myocardial abnormality.

A 2006 AHA scientific statement proposed a contemporary definition and classification of the cardiomyopathies [4]. The expert consensus panel proposed the following definition: “Cardiomyopathies are a heterogeneous group of diseases of the myocardium associated with mechanical and/or electrical dysfunction that usually (but not invariably) exhibit inappropriate ventricular hypertrophy or dilation and are due to a variety of causes that frequently are genetic. Cardiomyopathies either are confined to the heart or are a part of generalized systemic disorders, often leading to cardiovascular death or progressive heart failure-related disability.”

(skipping this step - as i couldnt find useful sources)

I did a lexical search and ranked the returned concept id based on their descendant record count/record count in the OHDSI Concept Prevalence study. 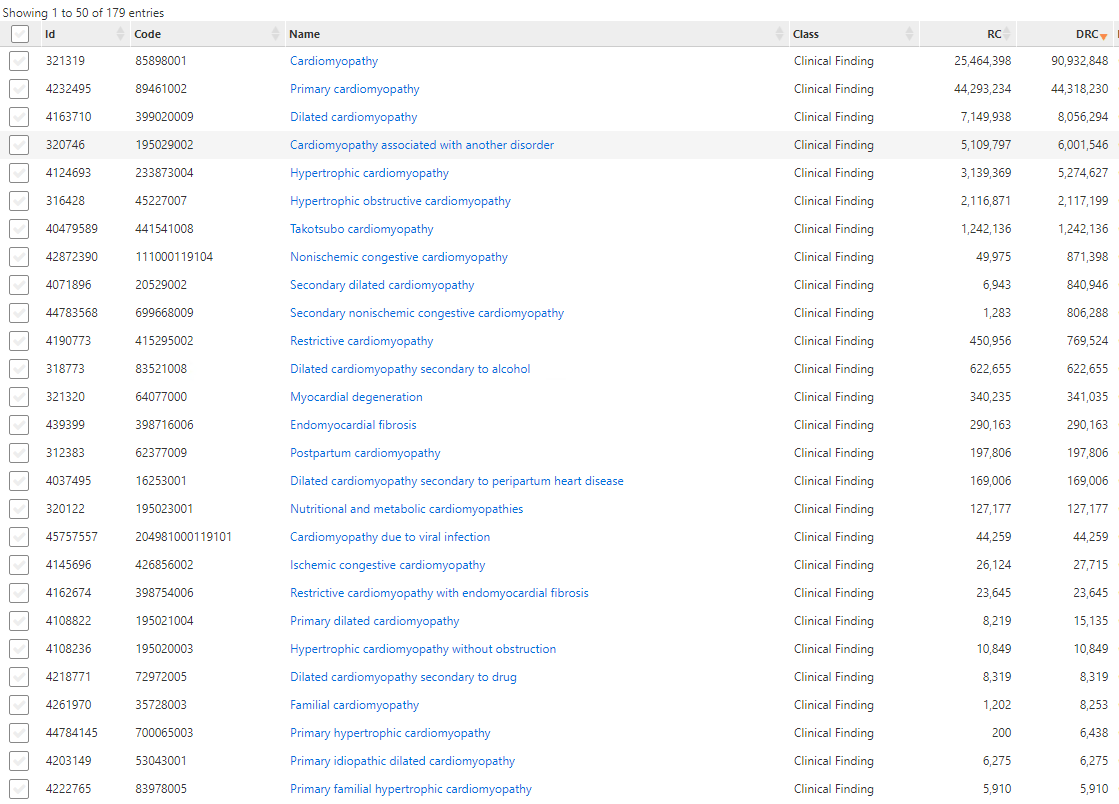 The top two concept id that accounts for ~70,000 records (25,464,398 + 44,293,234) of about 90,000 records total - are non specific to the various major sub-types of cardiomyopathy. This is an indication that it is most probably not possible, in observational data - to discern between the major subtypes of dilated cardiomyopathy, hypertrophic cardiomyopathy and restrictive cardiomyopathy.

Any clinicians/cardiologists in OHDSI who can help me?

Should we build a cohort with the broad cardiomyopathy concept set expression like this?

Dilated Cardiomyopathy
Overview: characterization by cardiac dilation and impaired contraction of ventricles - systolic heart failure with population prevalence estimate of around 3.6 per 1,000. Many are clinically unrecognized. viruses and gene mutations are most common causes
Presentation: many asymptomatic. presents with symptoms of systolic heart failures
Assessment:

Not yet there, but the explanation of your process of phenotype development is enlightening. I am not a clinician, but looks like we will need three “full” phenotypes for each subtype with their own clinical definition process, literature review, etc. Just like different types of diabetes.

Yes. I will get it to completion. Apologies

Yes. I will get it to completion. Apologies

Didn’t mean it as a critic

, on the contrary I am impressed by the amount of work and how thoroughly you tackle all these complex phenotypes. Let me know if I can help you further in any way.

I am not a clinician, so I’m not sure this is helpful, but looking at the concept record counts, it looks like >70% of the data is loaded on ‘cardiomyopathy’ and ‘primary cardiomyopathy’, which means that if we go down the path of trying to define subtypes, then we’ll need to figure out how to allocate the ‘non-specific’ cases (somewhat akin to the issue that @Adam_Black raised with TNBC on Day 19). Given that the data cannot parse the distinction, I wonder whether a clinical description that combines the subtypes together is useful.

looks like >70% of the data is loaded on ‘cardiomyopathy’ and ‘primary cardiomyopathy’, which means that if we go down the path of trying to define subtypes, then we’ll need to figure out how to allocate the ‘non-specific’ cas

see ARES reports for concept id and found that their utilization changed (increased dramatically) after 2016 (in US datasets) when the switch happened from ICD9-CM to ICD10-CM.

We are observing a shift to specific codes in recent years. So I wonder if that would make an impact.

More evaluation to follow this week. To be continued…